I want an apple : a book about the body / by David L. Harrison ; illustrated by David Catrow. 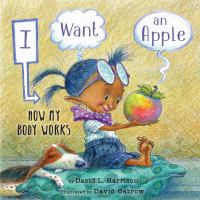 Search for related items by subject

I Want an Apple : How My Body Works
by Harrison, David L.; Catrow, David (Illustrator)
Rate this title:
vote data
Click an element below to view details:

I Want an Apple : How My Body Works

David L. Harrison's books have received state awards in Kansas, Missouri, Michigan, Arizona, South Dakota, Indiana, Texas, Kentucky, and Virginia. Awards also include IRA/CBC Children's Choices, NCTE Notable Poetry Books, and Bank Street College Best Books. The David Harrison Elementary School in Springfield, Missouri, is named in his honor. David lives in Springfield, Missouri. David Catrow has illustrated many bestselling books including When God Made You by Matthew Paul Turner, I Like Myself! by Karen Beaumont, and Take Me Out of the Bathtub and Other Silly Dilly Songs by Alan Katz. He received a New York Times Best Illustrated Award for She's Wearing a Dead Bird on Her Head by Kathryn Lasky. His books for Holiday House, which he also wrote, are The Fly Flew In and Fun In the Sun. Mr. Catrow lives in Ohio. Learn more at catrow.com.